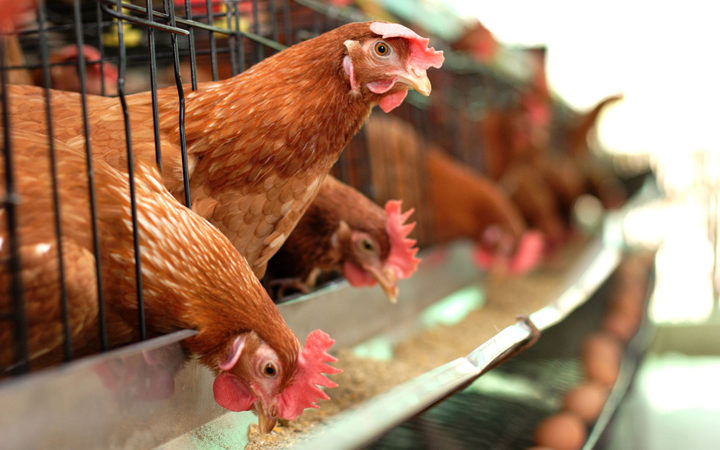 Animal welfare group SAFE have launched a campaign asking for colony cages to be banned in New Zealand.

Battery cages, which can house between four and 10 egg-laying hens, will be phased out by the end of next year, but the larger colony cages are still legal.

Confining hens was not only cruel but completely unnecessary, she said.

“Our Animal Welfare Act states that animals must have the ability to perform normal behaviours.

“That’s the law, but a hen in a colony cage, she can’t do any of her normal behaviours and those include scratching at the earth, foraging, stretching her wings, moving around freely or avoiding aggressive hens in the cages so basically it’s so highly restrictive and there’s so few enrichments available to them.

“They can’t perform their normal behaviours, which basically means that colony cages are in breach of the Animal Welfare Act.”

Some in the industry were moving away from the use of cages but if the government banned them it would force the hand of those still using them, Chambers said.

“Around the world we’re seeing these cages being banned. Yet here in New Zealand, no action is being taken so we’re using this campaign as an opportunity to get support from the public to sign our petition calling on the government to ban the caging of all hens.”

“Colony cages are lawful under the New Zealand Layer Hen Code of Welfare. Indeed the report that was released at the time stated that they provided equivalent or overall superior welfare together with barn and free range,” Brooks said.

“A number of farmers have adopted the system in New Zealand. Indeed, 29 percent of the layer hens in New Zealand are in colony cage systems.”

Agriculture minister Damien O’Connor said the government had no plans to ban colony cages at this stage.

The code of welfare for layer hens was developed by the National Animal Welfare Advisory Committee and took into account international best practice, O’Connor said.