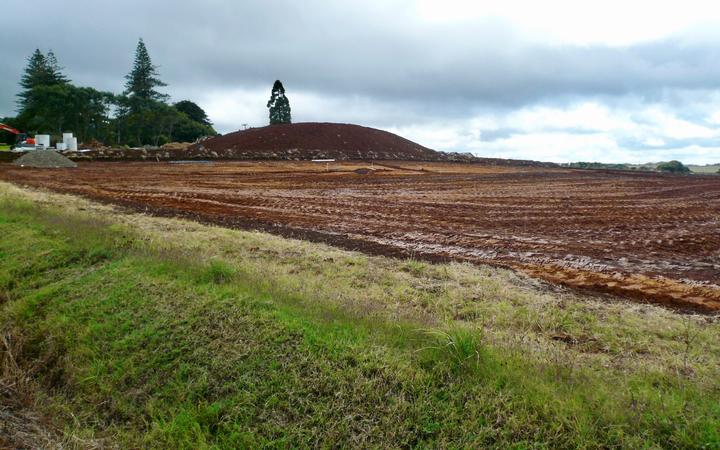 A new report paints a stark picture of the environment under relentless pressure.

The Environment Ministry and Stats NZ today released Our Land 2021 – a look at land use and the state of the environment in recent decades.

It is the latest in a series of environmental reports based on themes such as air, marine, freshwater, and climate.

It describes the loss of productive food growing land to urban sprawl, an eroded environment under pressure from more cows and increased intensification.

The report describes how highly productive agricultural land is being being eaten up by housing developments.

Only about 15 percent of land is flat, with good soil and climate that makes it ideal for food production, needing less irrigation and fertilisers. Think places like Pukekohe in Auckland and parts of the lower North Island.

Productive areas are often on the city fringes – right in the areas often seeing urban expansion.

The area of highly productive land lost to housing increased by 54 percent between 2002 and 2019. Market pressures will increase with more demand as the population grows here and overseas.

Ministry for the Environment (MFE) departmental chief science advisor Dr Alison Collins said if productive land was not available for agriculture it forced less suitable areas to be used.

They required more fertiliser and more irrigation which could then hurt the wider environment.

“The worrying thing for me from the report is that it’s going to become even more difficult to make those wise decisions when you’ve got a growing population needing more housing, but also needing a food supply,” Collins said.

“And then you’ve got a changing climate as well. So you’ve got all that uncertainty to try and wrestle with, so the decisions are going to be harder to make.”

City fringes are where there are many lifestyle blocks – of which the numbers are also increasing – removing this land from commercial food production.

Half of the total land area in Aotearoa New Zealand is now used for agriculture, forestry, and housing.

MFE secretary for the environment Vicky Robertson said the government was working on national policy on the tension between housing and productive land which is expected by the end of the year.

In the past 25 years land use has intensified – more livestock, fertilisers and irrigation – although overall there are actually fewer farms producing more product on less land.

Irrigation has nearly doubled since 2002 – the majority in Canterbury.

What is the effect of all this?

Soil quality targets have been set to ensure best yield but also limit the environmental damage.

Nationwide, 80 percent of monitoring sites failed to meet the targets for at least one soil quality indicator – and this is neither trending up or down.

Meanwhile, while substances like nitrogen are within the target range at nearly three quarters of sites (72 percent) – yet waterways are still being polluted with excess nitrogen.

The report says it shows the targets are not working – they are not stopping the environment being damaged.

And sectors like crop vegetable, cereals, seeds, orchards and vineyards don’t even have targets for nitrogen at all.

“It’s almost like a canary in the mine situation where we’re seeing enough evidence of the cumulative impact of our decisions that if you project that forward, which we don’t do in the report, with population change and climate, we need to find a better way of making hard decisions.”

The report said to truly measure the impact of intensification on the environment, the way soil is measured needed to change.

Currently, soil quality is measured according to a list of attributes – for example the amount a particular chemical is present.

Collins said a better measure may be soil health.

“This is a more holistic concept of the soil’s ongoing capacity to function as a living ecosystem and sustain plant animal and human health.”

A healthy soil supported high biodiversity which was more resilient, while intensive management stripped that biodiversity.

MFE deputy secretary strategy and stewardship Natasha Lewis said that switch was an example of the need for better environmental monitoring and reporting more generally.

“It requires investment and it requires a commitment across the country in terms of how the information is collected.”

What about climate change?

The report said climate change would drive an exacerbate land use problems. Serious weather events – both droughts and floods – would happen more often at a massive cost.

It was complicated though, because there would likely also be a longer growing season and warmer temperatures, which could bring new opportunities.

The report said decisions about how to act now were increasingly urgent as they would have a massive effect on future generations.