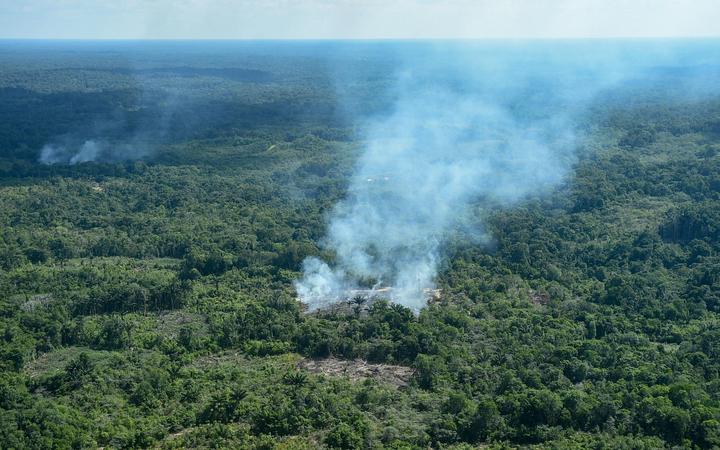 International leaders gathering at the G7 summit are reportedly nearing an agreement to help fight fires in the Amazon rainforest.

Leaders from the US, Japan, Germany, France, Italy, the UK and Canada continue their meeting in the seaside town of Biarritz on Monday.

It comes amid international tension over record fires burning in Brazil.

Critics have accused Brazil’s President Jair Bolsonaro, of “green lighting” the Amazon’s destruction through anti-environmental rhetoric and a lack of action on deforestation violations.

The severity of the fires, and his government’s response, has prompted global outcry and protests.

Mr Macron last week described the fires as an “international crisis” and pushed for them to be prioritised at the G7 summit this weekend.

On Sunday he said the leaders are “all agreed on helping those countries which have been hit by the fires as fast as possible.

“Our teams are making contact with all the Amazon countries so we can finalise some very concrete commitments involving technical resources and funding.”

What is Brazil doing?

The Defence Ministry has said that 44,000 troops are available to help in the effort and officials said on Sunday that military intervention has been authorised in seven states.

Warplanes have also been drafted in to dump water on the areas affected.

The president tweeted on Sunday that he had also accepted an offer of support from Israeli Prime Minister Benjamin Netanyahu.

Mr Bolsonaro has previously been critical of the response of foreign governments and accused them of interfering in Brazil’s national sovereignty.

Announcing the military help in a television address on Friday, Mr Bolsonaro insisted forest fires “exist in the whole world” and said they “cannot serve as a pretext for possible international sanctions”.

On Saturday, EU Council president Donald Tusk admitted it was hard to imagine the bloc ratifying the long-awaited EU-Mercosur agreement – a landmark trade deal with South American nations – while Brazil was still failing to curb the blazes.

How bad are the fires?

Wildfires often occur in the dry season in Brazil, but satellite data published by Brazil’s National Institute for Space Research (Inpe) has shown an increase of 85 percent this year.

Environmental activists have drawn links between President Bolsonaro’s attitudes towards the environment and the recent surge in the number of fires in the famous rainforest.

Mr Bolsonaro has been accused of emboldening miners and loggers who deliberately start fires to illegally deforest land. Earlier this month he accused Inpe of trying to undermine his government with data revealing sharp increases in deforestation levels.

BBC analysis has also found that the record number of fires being recorded also coincide with a sharp drop off in fines being handed out for environmental violations.

Neighbouring Bolivia is also struggling to contain fires burning in its forests.

On Sunday President Evo Morales suspended his re-election campaign and said he was prepared to accept international help to tackle blazes in his country’s Chiquitania region.

Why is the Amazon important?

As the largest rainforest in the world, the Amazon is a vital carbon store that slows down the pace of global warming. It spans a number of countries, but the majority of it falls within Brazil.

It is known as the “lungs of the world” for its role in absorbing carbon dioxide and producing oxygen.

The rainforest is also home to about 3 million species of plants and animals and 1m indigenous people.

Political leaders, celebrities and environmentalists are among those who have called for action to protect the Amazon.

Thousands of protesters have also taken to the streets across the world calling on governments to intervene.

On Sunday, Pope Francis also joined the call to protect the rainforest.

“We are all worried about the vast fires that have developed in the Amazon. Let us pray so that with the commitment of all, they can be put out soon. That lung of forests is vital for our planet,” he told thousands of people in St Peter’s Square.

Amnesty has captured photos of the #AmazonFires still raging in Indigenous territories in Mato Grosso state.

The forest is being burnt to a crisp.

Make no mistake this is a human-induced disaster and it started because of a fundamental disregard for Indigenous rights. pic.twitter.com/9MTjQN2qnn

The Amazon Rainforest produces more than 20% of the world’s oxygen and its been burning for the past 3 weeks. It’s our responsibility to help to save our planet. #prayforamazonia pic.twitter.com/83bNL5a37Q

The Fires Are Raging and The Amazonia continues to burn………This is a devastation to Brazil—to the indigenous people who live there and the-plant and animal species that make this the most important bio-diverse Forest!!! President Bolsonaro please change your policies and help not only your country but the entire planet. No economic development is more important than protecting this land. 🙏🏼 we need to WAKE -UP!! The future of the rainforest affects the future of the world! 🌎🌏🌍 #prayforamazonia #amazonrainforest #brazil #wakeup

#Regram #RG @rainforestalliance: The lungs of the Earth are in flames. 🔥 The Brazilian Amazon—home to 1 million Indigenous people and 3 million species—has been burning for more than two weeks straight. There have been 74,000 fires in the Brazilian Amazon since the beginning of this year—a staggering 84% increase over the same period last year (National Institute for Space Research, Brazil). Scientists and conservationists attribute the accelerating deforestation to President Jair Bolsonaro, who issued an open invitation to loggers and farmers to clear the land after taking office in January.⁣ ⁣ The largest rainforest in the world is a critical piece of the global climate solution. Without the Amazon, we cannot keep the Earth’s warming in check. ⁣ ⁣ The Amazon needs more than our prayers. So what can YOU do?⁣ ⁣ ✔ As an emergency response, donate to frontline Amazon groups working to defend the forest. ⁣ ✔ Consider becoming a regular supporter of the Rainforest Alliance’s community forestry initiatives across the world’s most vulnerable tropical forests, including the Amazon; this approach is by far the most effective defense against deforestation and natural forest fires, but it requires deep, long-term collaboration between the communities and the public and private sectors. ✔ Stay on top of this story and keep sharing posts, tagging news agencies and influencers. ⁣ ✔ Be a conscious consumer, taking care to support companies committed to responsible supply chains.⁣ Eliminate or reduce consumption of beef; cattle ranching is one of the primary drivers of Amazon deforestation. ✔ When election time comes, VOTE for leaders who understand the urgency of our climate crisis and are willing to take bold action—including strong governance and forward-thinking policy.⁣ ⁣ #RainforestAlliance #SaveTheAmazon #PrayForAmazonia #AmazonRainforest #ActOnClimate #ForestsResist #ClimateCrisis 📸: @mohsinkazmitakespictures / Windy.com